I’m going to switch gears away from trying to create a windows executable for Convergence Jukebox for a while. I’ve worked extensively on trying to create windows executables for the two main programs that make up convergence jukebox… Painful. I consulted the official Python Distribution Utilities page looking for answers but didn’t find anything that looked like it would work without spending a lot of time.

I’ve tried py2exe and I can’t find a way to trace the problem with the GUI program. Even worse after ensuring I had the most up to date python versions and installing them onto my development machines, py2exe won’t pip install into my 2.7 version of Python. It keeps wanting to install the python 3 version?!?

I’ve tried pyinstaller but it won’t include Tkinter in the executable because of some undocumented problem between PIL and FixTK?!?

This afternoon I tried cx_freeze and finally got the GUI  going for the first time but then ran into problems getting the Convergence Jukebox player engine going. Creating Windows executables with the tools available can be a real challenge in a complex program.

There are suggestions on the net to try Inno Setup or something else called bbfreeze but this looks to me like this can get really complex and could easily take a week to sort out. So I’m going to steer the ship towards posting working python code only. Windows users will have to install Python 2.7 code on their computers if they want to use it. Perhaps I can get back to it another day or someone in the community picks it up as a project in the future.

Still working on posting this code….. I haven’t gone away…

I’ve made some progress in my efforts to release the Convergence Jukebox code over the past few days. Given that it’s Christmas time there are a lot of family events but plenty of open spots where I can work on the codes release.

Over the past day or so I’ve managed to figure out GIT and GitHub enough so I can post the code. I’ve also modified the code by adding the licence information, creating a break in the program so users can add MP3’s to the appropriate music directory so it will work on its second boot and I’m in the process of building some exe’s to make its installation on windows as simple as possible. 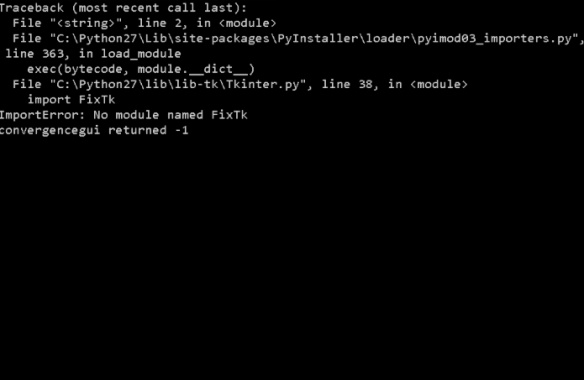 In running both pyinstaller and py2exe to create those exe’s I’ve run into a snag (shown above). My latest thinking at the time of this post is that it’s being caused because the windows executable is looking for the graphic that’s not being added to the compile. As a result the exe crashes at the point it looks for the graphic. I’ve found what I believe are the appropriate references for pyinstaller but it’s going to take me some time to figure it out…. So all I can say is I’m working on it as best I can…

It took me almost a year to complete my current project. Some months ago I started a project to create a Jukebox for myself capable of playing my mp3’s. Today mp3 jukeboxes are a dime a dozen but I wanted one that would mimic a 1950’s jukebox employing mechanical controls (of a type) and be coin operable. Initially I tried using two readily available programs DWJukkebox and Arcade Jukebox 8 (AJ8). I ultimately tried Arcade Jukebox 8 –I could not get DW Jukebox working with a coin machine– but with the development of AJ8 closed some years ago and no documentation I was limited to customizing it with external programs like AutoHotKey in the Windows OS environment.

Last summer I decided to write my own Jukebox –with the features I wanted– from scratch using Python. I chose Python because I was told it was easy to learn and it’s cross platform. I did the initial development on Windows and placed a fully functioning Windows OS Convergence Jukebox beta version in the field within the last two weeks. Convergence Jukebox 1.0 contains the following features.

Today I managed to complete the initial port of the python software to my Raspberry Pi. It only took me about four hours total to configure the code for the Pi version. Primarily it involved changing the code slightly to accommodate the mpg321 mp3 player and changing the filepaths between the Windows OS and Raspian Wheezy OS.

Here is how the initial port looks on the Raspberry Pi; 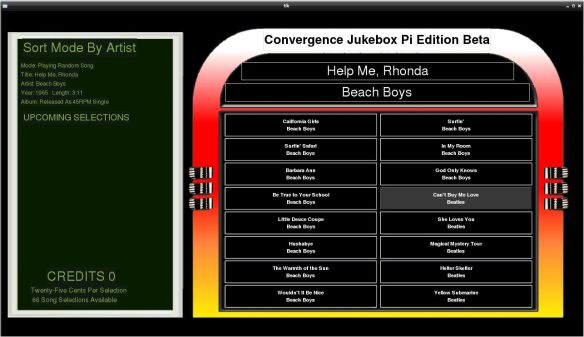 The Raspberry Pi Tkinter GUI (shown above) had no problem duplicating the look and feel of the Python code developed on a Windows 7 PC. 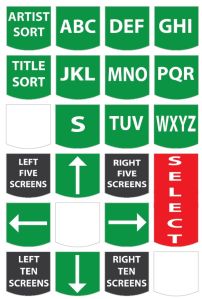 OK. Here is my recipe for working with Python on my Raspberry Pi and ensuring proper set-up with a USB soundcard.

1.  First follow my previous blog post Back In The Raspberry Pi Business Today. Starting To Port My Python Based Jukebox To Wheezy to set up a remote desktop.

2. Install WinSCP on windows machine for file transfers and Putty to the Pi. http://winscp.net/

3. Using WinSCP create a python folder in the /home/pi directory. This is where python projects go.

11. Setup the USB soundcard by following instructions at http://learn.adafruit.com/usb-audio-cards-with-a-raspberry-pi/instructions Start at Updating alsa options on that page.

Convergence Jukebox 2, along with its Python Code, has been released at its Github site. Here is what it does. 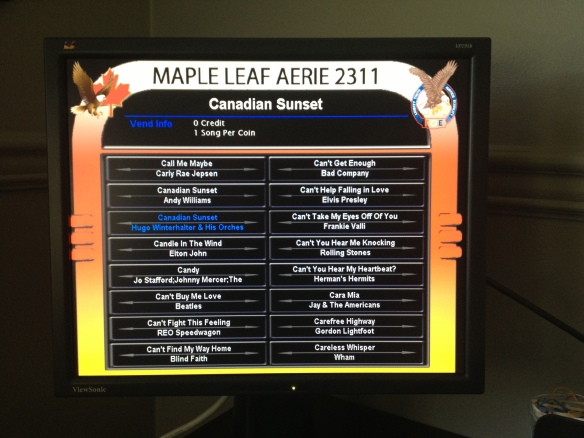 To accommodate its “retro” look and feel, Convergence Jukebox is not a touchscreen solution. It doesn’t use a full or popup keyboard and it doesn’t act like modern touchscreen jukeboxes where album covers, advertising and barker screens are baked into its design. That said, all of those features could easily be added to Convergence Jukebox’s code base by those with a desire and knowledge of Python coding techniques.

Features included in the initial release of Convergence Jukebox are quite extensive and are as follows; 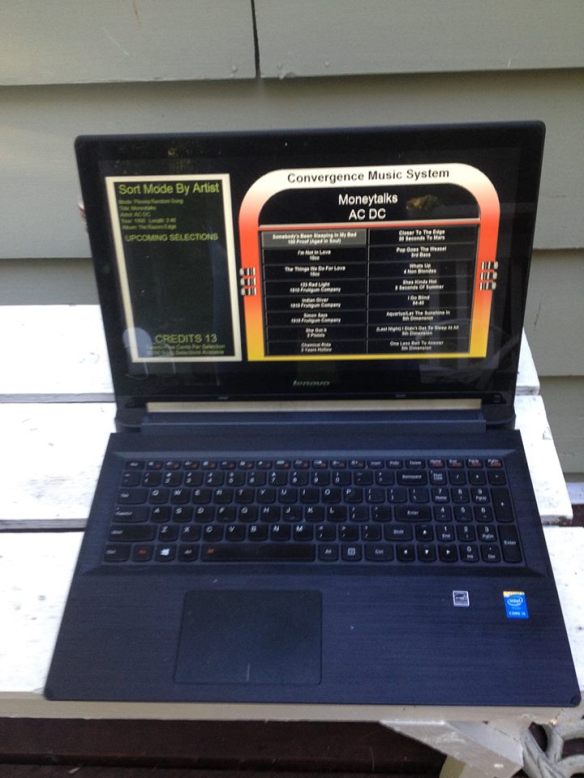 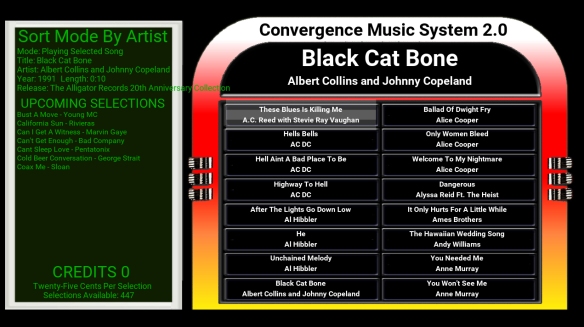 Convergence Jukebox is open source Python based software that has been written to emulate a “retro” style jukebox. The type of jukebox that was popular in bars, restaurants and recreation areas during the 1950’s and 60’s. The initial release version of Convergence Jukebox runs on a Windows based computer with Python 2.7 installed. The Convergence Jukebox source code will be distributed from its GitHub page to encourage others to further modify the software, adapt it to other platforms and to add features. 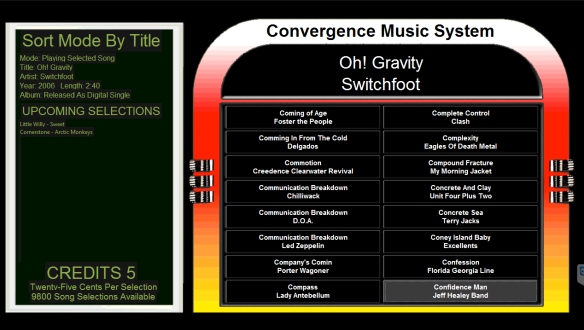 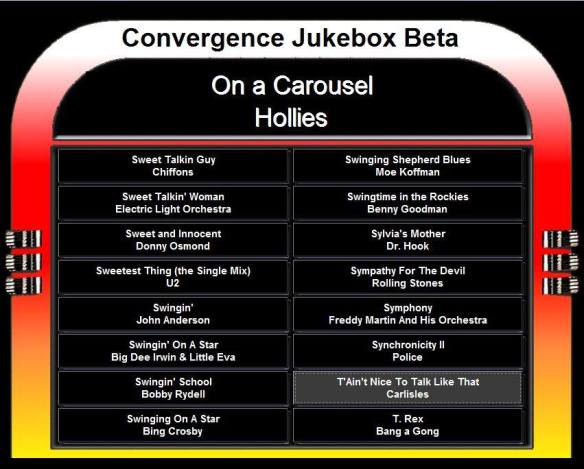 Written from scratch over the past three years by Brad Fortner of Convergence Communications, Convergence Jukebox plays properly formed ID3 tagged mp3 media. The Jukebox can be controlled for “personal” use by your computer keyboard but is better operated with a USB keypad such as a Pi Engineering USB keypad. Its output resolution is modifiable allowing it to connect to inexpensive computer, laptop or TV displays with its “retro look and feel”. It can even be connected to bill, coin or card acceptors such as a WeaveFuture Coin Acceptor via USB for “pay to play” situations.

Convergence Jukebox is written in Python allowing it to be cross platform. It is licensed with a GNU V3 General Public License that guarantees end users (individuals, organizations, companies) the freedoms to run, study, share (copy), and modify the software. It’s perfectly suited as a Jukebox software base for the Maker community as it can be easily modified and adapted.

To test its potential for interoperability, in 2014 the software was operated successfully on a Raspberry Pi 1. Only slight software modifications were required to make it operate in the Raspberry Pi and that was code adaptations to adapt the code to from a Windows based to a linux based mp3 player. During its development, which is now approximately three years, Convergence Jukebox has been running 24 hours a day, 7 days a week in a Toronto based service organization. It’s been pretty well road tested.