It’s been about a month since my last post. Over the month the work has progressed as follows;

Decided it was time for a major overhaul so I’m currently working on Convergence Jukebox 2021. Above is an early version of the new interface. Design goals include;

Will start updating code shortly as soon as I have a working version.

It was time to retire and modernize the hardware in my initial working version of Convergence Jukebox. This time around I needed to use Windows 10 as network viruses kept crashing my old no longer supported Windows 7 computer. My computer of choice for this installation was the ASUS TS10 VivoStick.

While the $165.00 (CDN) TS10 VivoStick specs aren’t impressive, the stick computer does contain a Quad-Core Intel Atom x5-Z8350 processor which includes Intel HD Graphics. It also has two Full Size USB ports (including 3.0), a headphone jack, Bluetooth, Wi-Fi, 32GB of Flash Storage and –most important– it comes with Windows 10 home. When I added a generic ($35 CDN) 128 GB 3.0 USB stick as drive D, the total cost to test it out $200 CDN.

This total price was a bargain given the VivoStick with Windows 10 installed was the same price ($165 CDN) as purchasing Windows 10 Home software from Microsoft Canada. And most important for this project is that the VivoStick has hardware specs that should be enough to run Convergence Jukebox. One additional piece of hardware I needed was a 4-port powered USB 3.0 HUB as the Convergence Jukebox configuration requires 3 USB connections.

The bottom line…. It works. And it pretty much worked right out of the box using Convergence Jukebox For Windows v0.3 software and it works with the WeaveFuture Coin Acceptor. However I did have some work to do in getting the hardware operational.

First I went through the process of speeding up Windows 10 with the help of this article titled “How to speed up Windows 10 By Nate Drake“.

Because the TS10 only has 32GB of Flash Storage reducing the footprint of Windows 10 on the VivoStick was a priority. I started by uninstalling and erasing all of the unnecessary software on the Flash storage. I did not use PC Decrapifier because I wanted to closely review the software I removed because I did not want to accidentally erase required Audio and Video drivers. I did remove the VivoRemote software and all of ASUS’s product management tools as part of the process to reduce the footprint.

Despite reading numerous online articles that indicated one would only have 4 gig remaining, I was able to free up 10 gig of flash drive space after being persistent. I was able to achieve this using a new piece of public domain software called  BleachBit.

BleachBit freed up almost 6 gig of flash drive space after I had exhausted all my usual bag of tricks so it was worth using. There was one other piece of software I had to employ.

The latest features update of Windows 10 proved to be too large to install on the VivoStick. It downloads onto the VivoStick but in order to install it needs 16-20 gigs of storage space. Windows update kept sending update error messages to the screen which overrode the Jukebox app.

To overcome this I used wushowhide which is a troubleshooting app from Microsoft that allows you to show or hide Windows Updates. It allowed me to stop the update until I can find a better solution.

In addition rather than install the Convergence Jukebox For Windows v0.3 to drive C, I installed it to drive D given its 128 GB disk size.

One last thing. While transferring my library of songs I reached a limit of what I could transfer to the  generic ($35 CDN) 128 GB 3.0 USB stick that I use as drive D. It turned out that the USB stick was formatted as FAT32 which has limitations. A quick reformat of the USB stick to NTFS solved the problem.

Here are the latest designs of the Convergence Jukebox KIVY based opening screen with its new retro look. As well I added some more test animation or the opening screen. As I complete the software the blue oval will update users about where they are in the start-up sequence as the records shuffle via animation.

I need to attribute the Creative Commons graphic elements used in this sequence; 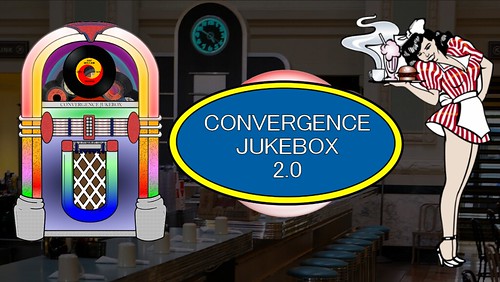 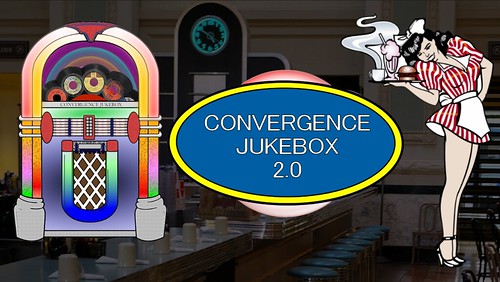 A preliminary version of Convergence Jukebox 2.0’s KIVY based opening screen. The records inside the jukebox will spin at start while the software retrieves or builds the database of songs. The blacked out area will provide visual feedback of the progress of either the building or the loading of the database.

Above are some early Inkscape SVG renders of some of the Artwork that will be animated and used in future versions of Convergence Jukebox. SVG provides very sharp and detailed vector graphic renders.

It’s taken some time but this video shows the first demonstration of the new rotating 45RPM record display developed for Convergence Jukebox 2.0 using Kivy. It will be added at a future date. The code will not only include the ability to rotate the record as shown above, but also the ability to generate the 45RPM records Artist/Title labels on the fly for immediate display. The code for this application is available on GitHub at https://github.com/bradfortner/Kivy-Working-Examples/blob/master/45%20RPM%20Record%20Rotation%20Using%20Scatter.py and at https://github.com/bradfortner/Kivy-Working-Examples/blob/master/45RPM%20Record%20Label%20Engine.py

It’s been almost a year but today I did my initial commit to the new Convergence Jukebox 2 software. Users wont find much difference between the two versions other than the Jukebox 2 GUI code is written using Kivy. My belief is that a Kivy base will allow me to speed up new features for Convergence Jukebox 2, many of which I have preliminary working Python code for.

During the year of re-coding errors on the Github site were reported –primarily missing files– which I took time this morning to fix. Everything from a Windows OS perspective appears to be working and I updated the associated readme’s to explain how to use the software.